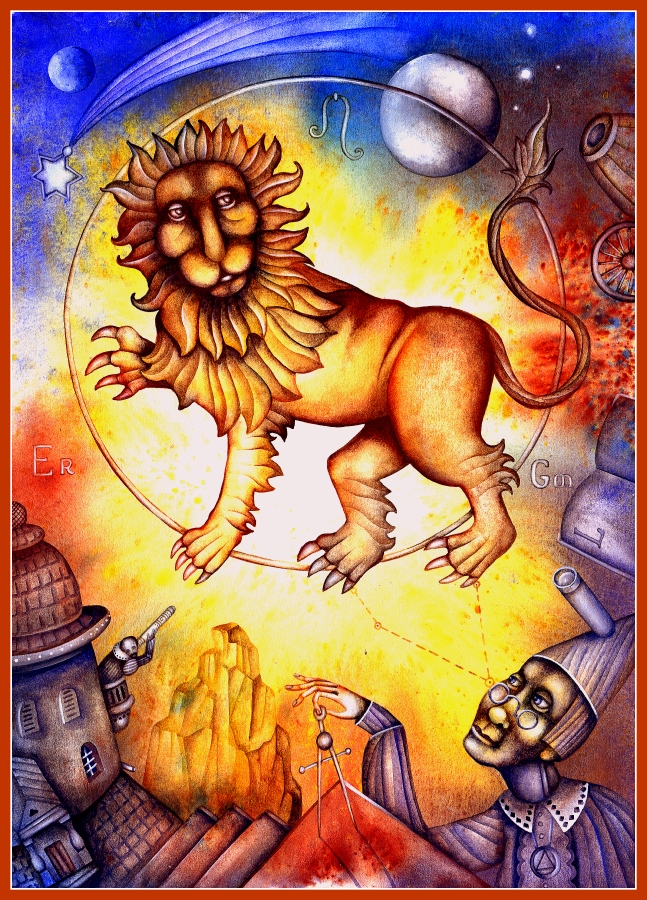 The New Moon occurs today at 5:51 PM EDT.  The Sun and the Moon are joined together  (conjunct) in mid-Leo (15 degrees, if we round up).  Since all signs cover 30 degrees of the zodiac, 15 degrees falls right in the middle, and can be seen as concentrating the energy of the sign in question, especially in Fixed signs like Leo.  Some consider 15 degrees of the Fixed signs an “Avatar point” or opening for great teachers who appear to help the human race advance by “downloading” important teachings. The “first harvest” festival of Lammas/Lughnasadh is also celebrated at this time.  It’s a “crossroads” time as one season moves inexorably into the next.  We can see that this is an important cross-quarter  “collection and distribution” point.  Since this point occurs in Leo,  ruled by the Sun, the message is to radiate from the essence of your being.  Leo energy (particularly the Sun in Leo) is “yang” by nature. Leo is a fixed sign, determined and focused, so this energy field functions as a continuous beacon that projects outward (fire signs work like mini-blast furnaces).  Leo is connected to the 5th house, which represents self-expression, children, creativity or artistry, and entertainment or “playacting” of all stripes. It’s related to the expression of the heart chakra, or “coming from the heart”. Other Leo themes include generosity of spirit, a desire to be appreciated, personal pride, and taking charge.

If you want to be in sync with today’s New Moon, wear Leo colors:  gold, oranges and yellows, which reflect the light of the Sun.  Marina Costelloe, in her wonderful book “The Complete Guide to Crystal Astrology”, associates the stone Opalite with 15 degrees of Leo.  Opalite is considered to be a well-rounded healing stone that helps clear energy blockages and enhances psychic abilities. It’s most effective when placed on the crown chakra (third eye), and is good for meditation.  Another way to honor the New Moon is to make yourself more “visible”. Leo likes to be front and center. In what areas of your life can you move from being a spectator to being an active participant in the “show”?  Those of you in business may find this is a good time to focus on how your company or business presents itself or comes across to others. Take a look at your publicity materials, upgrade your presentations, develop leadership potentials, get out there and  promote, promote, promote!

Take a look at where 15 degrees of Leo falls in your birth chart in order to determine where your “new season” is beginning. Those of you with planets or chart points at 15 degrees of any of the other fixed signs (Taurus, Scorpio and Aquarius) may feel “supercharged” by the New Moon energy as well.  For all of us, it’s a good idea to spend some time focusing on what we love,no matter what that may be. What gets your heart pounding faster? When do you feel most creative, most in charge of your own life? That’s the direction to move towards.

This New Moon trines Uranus in fire sign Aries,  so we may find it’s a little easier now to express ourselves in a dynamic (and unexpected) way. This can also mean that we’re “set free” from past restrictions in order to pursue new interests that are more in line with our essence.  In other words, Uranus kicks out the jams.  When things get too comfortable or we’re too complacent, Uranus swings on by and shakes it up.  Those of you who have been living someone else’s agenda for long periods may now find that you’re putting your own creative expression first.  Aries and Leo together  =  boldness, self-confidence, assertion, being “on fire” about something.  This combination asks us to value our own uniqueness, the gift we have to offer the world.  It’s about taking that leap of faith, trusting in our own talent and vision. Uranus also has a tendency to knock things topsy-turvy and take us outside of our boundaries, so we can look at things from a more detached perspective.

Uranus, in addition to its trine with the New Moon, also is part of a T-Square configuration with Pluto in Capricorn and Jupiter in Cancer, with the Jupiter/Pluto opposition exact tomorrow. This “power player” dynamic is in cardinal signs, which are about initiation and action. This trio does things in a big way. This can be a significator of huge earth changes and unrest or upheaval in world affairs.  Revolution, renovation, and reconstruction are on the menu now. Jupiter in Cancer is also part of the Grand Water Trine with Saturn in Scorpio and Neptune in Pisces, so one way or another we will be reminded that we’re all family. Whether we grow in empathy on our own or are forced to develop it due to assorted catastrophes, we will learn that lesson.–either the easy way, or the hard way, if we resist.

And speaking of resistance, this New Moon is also square the North Node in Scorpio and the South Node in Taurus, further emphasizing the need to move away from the old forms /karmic patterns/family dynamics that we’ve become comfortable with. It’s not easy to leave the past behind, We’re dealing with fixed signs here, and they are often reluctant to let go of a good thing. You may have noticed there’s been a bit of polarization between those who are entrenched in the current order and those who’d like to make some major changes.  The North Node in Scorpio is the new path, and it involves a certain amount of breakdown, shedding of skin, and crashing through obstacles.  And since the New Moon also forms a wide square to Saturn in Scorpio, we are forced to realize that the old rules don’t work anymore. You may live in an old house and love it for its character, but if the roof is caving in, it’s time for some major renovations.  Or maybe it’s time to move out of the house.  Sometimes we have to recognize that a situation is untenable. So move into the new house already!

One of the interesting features of this New Moon is its connection with the asteroid goddesses. It’s super-closely allied with Vesta, almost as close to Ceres, opposite Juno in Aquarius and also aspects Pallas Athena. Pallas is currently hanging out close to her mythical father, Jupiter (both are in Cancer). Pallas is a spiritual warrior, the goddess of wisdom, who burst from her father’s head, armed and ready to rock and roll. Both Pallas and Jupiter oppose Pluto in Capricorn and trine Chiron in Pisces.  Meanwhile Vesta, guardian of the hearth and the sacred flame, cozies up to this New Moon, raising issues of sacred work, protection and guardianship. Ceres is the “mother earth” goddess, connected with food, nurturance, and growth. Juno is the relationship goddess (married to Zeus/Jupiter), and she is to be found opposite the New Moon. All this asteroid action pretty much screams “get right with the planet” and “return of the power of feminine energies”.  The asteroids are ganging up on this New Moon, desperate to be heard. There’s great healing and great wisdom to be absorbed  if we can figure out how to stop projecting our shadow side onto half of the human race and cease operating from an old paradigm steeped in fear and superstition.

As you can see, there are quite a few interlocking themes weaving around this New Moon. Key concepts:  Be Yourself. Free Yourself. Open your heart; be open to change.

The rest of today’s aspects help us incorporate the lessons of today’s New Moon. The Moon is Void-of-Course after the New Moon, so we may have to “sit with” these energies this evening . Don’t worry–there will be plenty of action later when that cardinal sign T-square goes boom!  As the Moon inconjuncts Chiron at 2:09 PM EDT,  we’re more than aware of  those areas in our life that need an influx of healing, so it’s a wise idea to place our focus there.  A Moon/Mars link at 9:20 PM EDT warms the heart and prods us to take action prompted by love or passionate feeling for something/someone. A Moon/Saturn parallel at 9:33 PM EDT may prompt us to worry that we’ve taken on too much and wonder whether we measure up. Don’t shut down your heart or go to bed angry tonight!