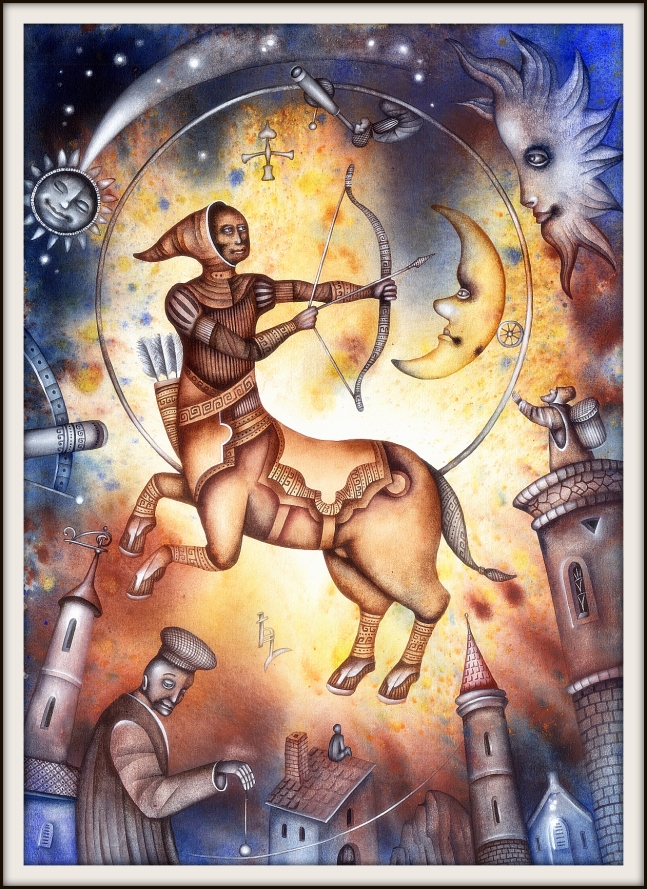 It’s a beautifully cool, clear, low-humidity day here in New York City, but my sleep was unceremoniously interrupted by the brain-thumping headache which woke me up.  I’m an Aries, so things tend to settle in and bash away at my head and face region. It’s not a fun way to start the day.  And let’s just say that even though my headache has abated, the general tenor of the day seems to have retained a throbbing, rather unpleasant intensity.

The Moon begins the day in Scorpio, where it trines Mars at 5:47 AM EDT.  At 6:56 AM, the Moon squares the Sun in Leo.  This  First -Quarter Square is generally seen as a “crisis” point.  Something’s ready to happen, based on actions taken earlier in the month. A day that begins with your unconscious being slammed into action, then proceeds to a challenging fixed sign square, can certainly test the old mettle. We’re being pressured at our weak points so we know where the changes need to happen. We’re probably going to be very resistant, as our old assumptions are put to the test. We might feel feel we’re being stretched on the rack as we’re pulled out of our comfort zones. There’s a feeling of being out of control or at the whims of a rather bitchy Fate today!

I’ve also noticed that people are being extremely demanding and somewhat irrational. Mars energizes, but if the energy goes in the wrong direction, it can create stress because of the “gotta-do-it-NOW: syndrome.  With the Scorpio Moon colliding with that Leo Sun, it’s like a shadow that suddenly darkens the sky. The Moon semi-square Pluto aspect at 11:17 AM EDT adds fuel to that conflagration as stress makes people resentful or withholding. The outlet for many will probably be overindulgence, as the Moon’s next aspect is to Jupiter (1:51 PM EDT. ) Those who take a late lunch will probably be busy trying to stuff down their emotions by filling up on food or drink!

The Moon hits Uranus at 4:18 PM EDT, so we may witness some generally wacky behavior as the afternoon progresses.  People who aren’t comfortable dealing with difficult or emotion-laden issues may try to escape by just taking off, so if a discussion gets heated, don’t force the issue.    It’s time to take a break (whew!) after 5:30 PM EDT when the Moon sextiles Venus.  Do something nice for yourself  in order to release the pressure that’s built up today.  The Moon will be Void-of-Course until it enters Sagittarius at 9:04 PM EDT, so use this period as a wind-down.  Get out and do something; exercise might be a good idea now.  Anything that makes you feel freer or lighter will work. Mercury trines Uranus in Aries at 10:11 PM EDT, so put on your brainiac cap and see if you can generate some funky new ideas. Mercury has been busy today–in addition to the trine I just mentioned, it makes a few other aspects, so some of the stress we’ve been experiencing is caused by the realization that it may be time to reorient the way we think about established/stagnant situations in our lives. We have to be able to visualize things before we can implement changes. Be alert for new ideas (and the people who espouse them) today.  Hey, if you irritate an oyster enough, it may produce a pearl!  Take the long view.

Kozminsky Symbol for today’s SUN: “A  trumpet made from a ram’s horn bathed in the sun’s rays.”

The Keyword for the Sabian Symbol is:  “ AUDACITY. ”

The Keyword for the Kozminsky Symbol is: “INCITEMENT.”

The Kozminsky Symbol features an Aries signifier (ram’s horn), and a rabble-rouser feel that’s Uranus all the way, so put these two together and you have Uranus in Aries! This Symbol illustrates a call to action, and the horn bathed in the Sun’s rays (the Sun is considered to be exalted in Aries, so it’s in a strong position there) and indicates helping others “see the light”.  It’s associated with Mars, ruler of Aries, which today is trine the Moon and parallel Jupiter, so we’re being driven by a deep urge to break on through to  a brighter, newer and better future.  It’s becoming more and more urgent that we make a move. There’s a prophetic feel to this Symbol, again, leading us to the tie-in with Jupiter, which at the moment is hooking up in a T-square with change-makers Uranus and Pluto. This is the call of the new, a herald of revolution. We hear the call, and are inspired to answer. Note that both of today’s Symbols relate to taking action–there’s no sitting on the sidelines now!

10 of Pentacles / Queen of Cups

“Inheritance”. This combination focuses on family history and that which has been passed down, particularly from the female line. It can relate to a prominent female figure in your life, like a grandmother, and what you’ve inherited from her. You may feel a connection or a psychic connection to an ancestor. Maybe she’s showing up in your dreams or somehow signalling that she’s nearby (especially if you’ve also inherited intuitive skills from her! ) It’s about the family narrative, the stories that tie you together. It can also be a literal inheritance–someone leaves you a great deal of money or objects that have great sentimental value.  Here’s where you establish a dynasty (, often built on the foundation established by those who lived before you. There’s a feeling of destiny, of being led to where you belong. A permanent source of inspiration to draw from. Grounding your psychic abilities.  Replenishment. A flourishing family business or one with a powerful woman at the helm. Following your hunches gives you a practical edge. Ancestral spirits are near as you go about your daily activities.