Happy 2012 to all, a few days late, ’tis true, but hey, I’ve been busy! Holiday matters beckoned, as did a trip to Turks & Caicos (can you say r-e-l-a-x?) and of course, our annual New Year’s party (see below for festive photo!) 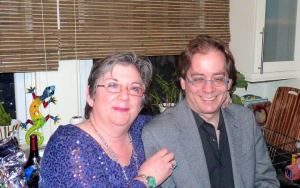 I’m Valerie Sylvester, and some of you may be familiar with my daily astrology blurbettes on my facebook page and (formerly) on www.TarotElements.com. I’ll now also be posting them here; the same information can be found on my facebook and G+ pages as usual, and in truncated form on my Twitter feed. I also have been appearing as a co-host on some of the tarot card discussion programs on Donnaleigh DeLa Rose’s blogtalk radio program, Beyond Worlds.  I also plan to blog on an irregular basis here on Another Day, Another Planet–essentially, as the spirit moves me!  I’ll write about both astrology and tarot, as I’ve been studying tarot as long as I’ve studied astrology and have a keen and ongoing interest in both.

A FEW WORDS ABOUT THIS BLOG:

The title is a variation on one of my favorite songs, “Another Girl, Another Planet”  by the Only Ones. It works well for the daily astrology posts, I thought!

And speaking of daily astrology, here’s my first for this new year: January 4, 2012:

The Moon’s in Taurus and squares Venus early in the day so we want what we want when we want it and can be somewhat unyielding (a/k/a pig-headed) about it & people’s emotions may be on overdrive; tread lightly. Later the Moon trines Mars in Virgo so with a little effort, much can be accomplished–don’t slack off today! A Venus/Jupiter quintile infuses some magic into the atmosphere, so breathe deep and think about what you want most & don’t forget positive thinking can take you a long way.This evening the Sun in stress aspect to Neptune can bring in confusion/illusion/delusion but if we remember to wipe the sparkle dust out of our eyes & use the Moon in Taurus to ground & center ourselves, we realize this too will pass!
Enhancer/Antidote: Strength/Sun

I accept Paypal and even though I live in the New York City area, my rates are quite reasonable!

This blog is a work in progress and no doubt it will look better as time goes by (well, I hope so, anyway!) I’m not particularly technically inclined so bear with me a bit as I experiment with the wonders of WordPress! And I hope you’ll accompany me as I explore, through astrology, tarot and intuition, some of the patterns occurring in this exciting year, 2012!