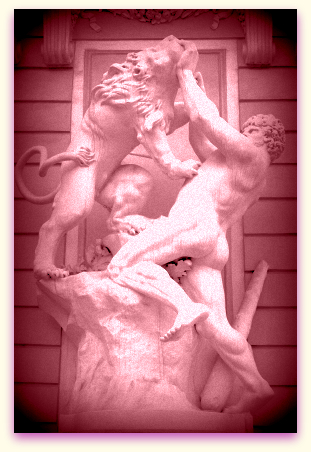 The Moon remains in Libra today, although it will be Void-of-Course after 8:12 AM EDT. Looking at today’s aspects, we have “Happy Happy Joy Joy” hooking up in a lush and secret location with “heavy, hot and intense”. Moon in Libra will try to referee the outer planets, but the Void condition and Libra’s tendency to look out for everyone but themselves will make this a tricky balancing act.

The Moon trines Jupiter at 7:13 AM EDT, a very expansive aspect. Today’s an excellent day to get out and socialize with groups of people, head to the restaurant for a lavish dinner, and in general indulge yourself a little. It’s a good time to connect with smart and savvy women, too. There’s a feeling that we need to grow past restrictions, to expand and take chances. This can even feel overwhelming at times. We might take it all too far, but since we do it with a wink and a smile, we’ll probably get away with it.

The Moon opposes Mercury at 8:12 AM EDT, another “too too much” aspect. There’s a clash here between the need to satisfy our primal, emotional side and the equally compelling need for the freedom to say whatever the hell pops into our skulls. There may be a bit of a disconnect, so make sure what you’re saying jibes with what you really mean. This aspect can also indicate that there’s a lot going on at once in your day-to-day environment and you need to juggle more than one buzzing chainsaw.

The next aspect up to bat is Venus in Taurus trine Pluto in Capricorn. Here’s where the “HHH “ (heavy, hot and intense) sashays into the room. If you look at the rest of today’s aspects, you can see it’s a day with a lot of ‘va-va-va-voom”. We’re dealing with earth signs in a harmonious aspect, so the charisma meter is twisted  to high. We’re talking all kinds of attraction here, too, not just sexual attraction. Venus in Taurus is a universal attractant, so think money, real estate, jewelry—all the good things the material world has to offer. It’s about feeling “rich” and being comfortable in your own skin. If this combo was a person it’d be someone who dresses very elegantly in sensuous fabrics and expensive jewelry while at the same time maintaining a classic sense of style and grace. It’s sexy but not tacky.  This combination also relates to secrets and hidden love affairs. On the high side, this combination protects and defends all who are part of its “sacred garden”. It’s about the transforming power of love. It can indicate secret or hidden resources or talents as well.

Today’s last major aspect, the Sun sextile Neptune at 5:58 PM EDT reminds me of a product I saw the other day: edible glitter sprinkles. They’re sparkly and pretty, but you can also put them on top of a cupcake and eat ‘em. This is a very creative-minded aspect that continues today’s theme of opening up our world and thinking big. Look for inspiration in the natural world,  take a “mental health break” to listen to music, go for a stroll, or ponder the mysteries of the universe. Don’t space out too much, though; in order to take advantage of today’s aspects it’s nice to be connected to the planet!

Today’s planetary exchanges highlight some of the major issues that are coming to the fore in relation to tomorrow’s eclipse. I’ve noticed that lately many people have been reassessing relationship ties, and not just to other people. This process includes relationships to jobs or careers, material things, and to other commitments in their lives. There’s an explosive element to this reassessment, and it feels urgent, a real need to expand the perimeters. In some cases, the relationships will end in order to accommodate these “growth spurts”. There’s a great deal of reassessment going on. People want to transform their relationships, but if that isn’t possible, it’s bye bye bye.

With the Moon currently in Libra, there’s a desire for fairness and the realization that some relationships are out of balance, with one person giving too much and the other just taking. Today’s the kind of day where some long-buried resentments may come to light as it dawns on people that  they deserve a decent life and don’t have to put up with manipulation/situations that drain the life out of them. It’s like going on vacation, having a wonderful time, feeling totally “yourself” but then returning to a nasty and suspicious boss who berates you non-stop. The first impulse is: “Why am I putting up with this?”  We’re realizing that we deserve to feel good. As the Scorpio eclipse looms, these issues will be highlighted wherever the eclipse falls in your birthchart. Scorpio says “transform or die” and it will feel like a life-or-death struggle at times as the old falls away to create space for the new.

Sabian Symbol for today’s SUN: “A widow at an open grave.”

Kozminsky Symbol for today’s SUN: “Two young men carrying huge branches of large grapes on a pole between them, giving freely of the fruit to troops of children.”

The Keyword for the Sabian Symbol is: “REORIENTATION.”

The Keyword for the Kozminsky Symbol is: “BENEFACTION.”

Today’s Symbols are perfect for our strong collection of astrological aspects. The themes of generosity, bounty, caring and sharing are reflected in the Kozminsky Symbol’s image of young men sharing their harvest with small children. The Venus/Pluto aspect, particularly, comes to mind in relation to the Sabian Symbol  of a widow (Venus = women) at her husband’s gravesite (Pluto = death/transformation/extreme changes to the life). The Kozminsky Symbol tells us that through our own hard work we not only enrich ourselves but are able to give to others. When we give with a good heart, release to the universe, we’re calling upon the laws of abundance in order to attract even more good things. It’s a benefaction, a blessing, a mitzvah. It’s a very Jupiterian image (abundance, large grapes, public giving).  This image also relates to the fecundity and abundance of the earth, which brings in today’s Venus/Pluto aspect (the wealth of the earth).

The Sabian Symbol is also about releasing and echoes today’s aspects as well. The imagery of the widow at a grave tells us that one phase of life is over, but we must begin again and release what has died (the open grave). The experience is still raw, but the process of moving forward has begun and it’s essential for further development. We need to learn to go on without whatever has supported us in the past, a difficult task. (Venus/Pluto doesn’t mess around, even in flowing aspects!) This image brings to mind past lives and past loves as well. I think around the time of the eclipse many people are going to go through some intense “déjà vu” experiences  related to old connections. Maybe it’ll be the final purge before we release our attachments to these connections.  The positive side of this image is the ability to go on in the face of great tragedy or intense change and loss. We need to honor the past and what we’ve let go (the funeral, visiting the grave), but we then need to move on to the next phase of our lives.

This is one of the Sabian “reversed symbolism” images, so the emphasis is on letting go rather than focusing on what’s dead and buried. Note the widow isn’t throwing herself into the grave. The down side is, essentially, “throwing yourself into the grave”, being so fixated on what you’ve lost that you’re living in the past, spending all your time obsessing over what was and not giving any thought to what could be.

“LionHeart”.  The Ace of Cups fits well with today’s “cup runneth over” emphasis.  There’s a surfeit of feeling as emotions welling up. This is a water card coming up right before an eclipse in another water sign  (Scorpio) tomorrow.  Combined with Strength, it reiterates the theme of taking a look at how we are tied and emotionally connected to others. We’re beginning to understand the true nature of love. Our initial attraction took us to a certain point, but now we’re realizing that some of our attractions/connections need readjustment. We may have been overcome by feeling initially, but then the secret door pops open and we realize it’s time to take a look at what lies behind. In the Mythic Tarot, Strength relates to one of Hercules’ tasks, the taming of the Nemean lion.  It’s about purification and raising our energies, learning to broadcast on another network. We’re all wondering right now whether we’re up to the task, which requires courage and strategy. It’s about wrestling with the residue false or narcissistic relationships (and anything based on ulterior/inferior motivations). We’re resetting the heart chakra here, and confronting all the ways we’ve let fear or dishonesty control our actions and lead us into inauthentic expressions of the self. This may cause a necessary shake-out in many areas of our lives, but we’re up to the task.