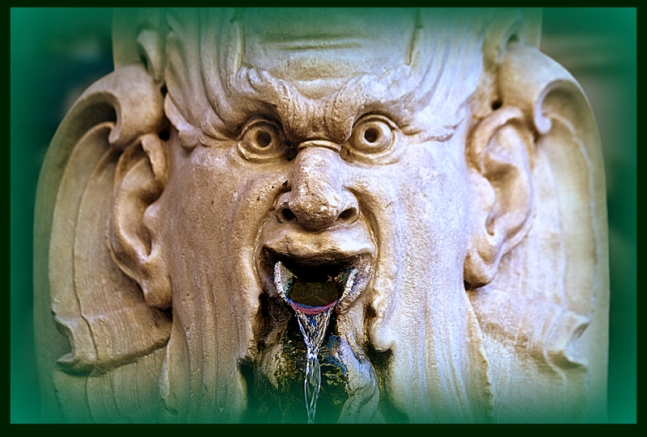 It’s a holiday for some of us here in the U.S., but the planets aren’t taking a vacation day. Today’s active, with the Sun moving from Aquarius to Pisces at 7:02 AM EST and Saturn  stationary retrograde at 12:03 PM EST. Once the Sun slithers into Pisces we will have a total of five planets/planetary bodies in the sign of the fishes (The Sun, Neptune, Chiron, Mars and Mercury), so we’re more than a little waterlogged today! With the Moon in Gemini, another mutable sign, we may find ourselves in the “variable zone” today and our moods may fluctuate like the tides.

Saturn, the planet of boundaries, limits and hard work, is also in the water sign Scorpio, and as noted, it’s stationary retrograde today, so we all may feel like we’re operating in slow-motion because we’ve been thrown into a swamp with lead packs strapped to our backs! Fortunately, Saturn is sextile Pluto and trine Mars and Chiron, so it’s time to jettison the excess weight and learn to tread water. One of the things I’ve learned about Saturn retrograde (I have it natally) is that you can’t really take short cuts or skim through/over things or you will be taken to task for any attempted short-cuts. It’s like a karmic rebound, and with Saturn aspecting Mars and Chiron, we’re being given the opportunity to course-correct and take a look at our work patterns and the way we deal with our obligations and responsibilities. This are “fixer” aspects, so dive in and start tinkering!

Since Saturn is in Scorpio, it’s time to go deep into the underwater zone and inspect that big shipwreck lodged at the bottom of the sea. It’s a good time to rectify errors, take care of things you’ve neglected, shore up your defenses, and release old baggage.  Don’t worry if it feels like nothing’s happening yet. With Mercury entering its shadow period and Saturn retrograde, it’s not a great time to push ahead right now. But it is a great time to catch up, refine, make plans, retrofit, and figure out how to eliminate problems and mistakes from your equation. Don’t get caught up in worry and negative projections (all these planets in water signs and the Moon in Gemini can lead us in that direction), but use the nimbleness and agility of these mutable signs to help find a solution. Water signs are naturally intuitive; tap into that energy and watch your dreams for a hint of futures to come.

Today’s aspects are a mixed bag. We start the day with the Moon sextiling Uranus at 5: 50 AM EST–anyone for brainstorms with breakfast this morning? The Moon joins Jupiter at 7:02 AM EST, so if you have time off today, it’s an expansive way to start the day, as an air of hopefulness reigns supreme.

After the Sun moves into Pisces and Saturn stations, things get a little wobbly as the Moon connects with Pluto at 2:57 PM EST, Saturn at 4:16 PM EST and Mars at 8:03 PM. Since Venus is challenged through squares to the nodes and a stress aspect to Uranus,  this combination is likely to produce some emotional volatility. All the water sign emphasis, plus the general “heaviness” people feel when Saturn moves, can make this a difficult day for some to process. We may find ourselves fighting old battles and wanting to move out of perceived ruts, but others may not be receptive to change, or we discover we’re more resistant than we thought.

It’s the kind of day where people may say things that are painful or even shocking to hear, but we need to hear them. Venus to the Nodes can bring in people from our past or re-open doors we thought were long shut. If someone or something from the past comes back today, take it as a lesson yo’re not finished with it/them yet; move in the direction of transformation rather than evasion or denial. It (or they) will keep coming back until you’ve learned the lesson, so you might as well face up to it. It’s important to be flexible today. Keep your mind and heart open.

Kozminsky Symbol for today’s Sun: “A satyr sitting on a rock by a river which is running into the sea, holding a fish.”

Today’s Kozminsky Symbol reflects both Saturn’s change in status today (Kozminsky states this degree is under the influence of Saturn, and the satyr is also a Saturnian signifer). He’s holding a fish, which is the symbol for Pisces, home of our planetary pile-up. This Symbol, with satryr and rock (another Saturn key word) by the sea, with fish, shows a tendency towards the mystic or occult arts, but care must be taken not to fall prey to negative manifestations or tendencies. We’re being guided here to stay on the high road and realize that we’ve entered the “instant karma” zone where our actions set in motion a chain of response and reaction that may return to haunt us if we don’t act with integrity.

The Sabian Symbol relates to today’s Moon in Gemini. It features a lively neighborhood scene where people come together to exchange not only goods and money, but also information or gossip. With Mercury in its shadow zone ready to go retrograde, there’s a suggestion here that we may find normal interchange or communication goes haywire, especially if people aren’t willing to cooperate with others in the normal give-and-take of day to day life. We may also hear news about transport, travel, internet or other types of “communication breakdown” events today. As this image is about a group of people interacting, the accent may be on doing what’s best for the group rather than for ourselves. We all need to do our share to prime the pump of social congress to keep things running. Being self-absorbed or uncooperative is not the best line of defense today.

Here’s a water and air combination that reflects all the planets loitering in water signs, plus our air sign Moon. The Justice card is associated with Libra and all things Libran, including laws, lawyers, and those who seek to right injustice, so this combination immediately suggested to me a righteous avenger, someone who cleans up murky situations or corrects past injustices.

The 5 of Cups shows a situation in which we’ve felt dishonored or betrayed, or else we now regret something we’ve done in the past that has caused pain and suffering. We may finally be able to see what IS, as opposed to what we want to see. There’s a challenge here to cut loose from entangling fantasies, false belief systems and fears that stand in the way of progress.

Saturn, currently in Scorpio, is considered exalted in Libra (Justice card) and helps enforce cosmic justice–but we have to do the work and take others into consideration for the best outcome. The solution will be fair and just, but may not necessarily be what we think we want, because we’re still reacting from past hurts and betrayal and not seeing clearly. Here we’re being told to “clean up our act” and get into balance, because we’ve been lopsided or inharmonious in the past. Here’s where our vision clears and we finally see both sides of the issue. What’s the cold, hard truth? That’s what we’re going to find out.