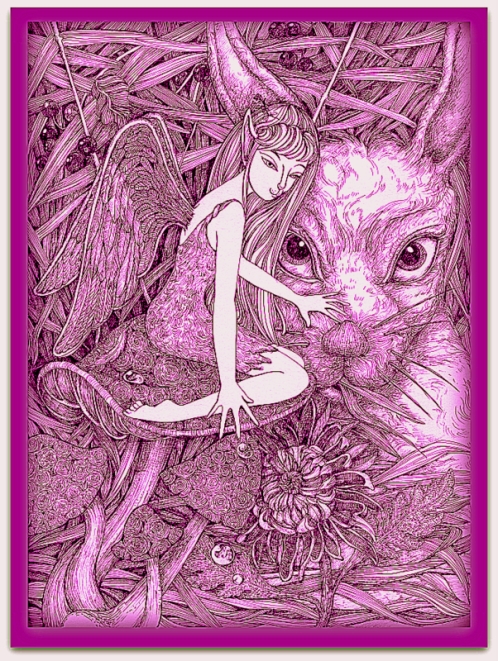 The day begins with Mercury, which has shifted back into Scorpio (2:43 AM EST), squaring Neptune, which has just gone direct. Things may feel unstable and confusing for another few days until we get our “sea legs”as Mercury and Neptune tangle, throwing heavy “cloud cover” over everything. People are on different wavelengths and have trouble understanding each other; misinterpretations or “creative” misunderstandings are legion. Next, the Moon aspects both Pluto and Mercury, further indicating there are things going on that aren’t being discussed. If you feel there’s a piece missing, there probably is. We’re not at the end of the mystery novel yet, it’s still in progress. Generally, it’s a good idea to keep confidential matters private right now. Don’t blurt or blab just yet if you’re holding sensitive information. People may not feel like revealing what’s going on or may be guarded.

The Moon enters Sagittarius at 5:53 AM,  a blast of  bright sunlight piercing through this morning’s fog. Expand your horizons;  make plans for the future. The Sun clashes with Pluto at 12:59 PM for a  turn of the screw and a bit of the ol’ squeeze play. Don’t get caught up in power struggles or push yourself into a corner you can’t escape from later. The Moon aspects Saturn, Uranus, Venus, Mercury and Pluto as the day progresses, so it’s likely you’ll come in contact with interesting, intense and inspirational people who will help you see things in a new light.

Today’s big blast: Chiron turns direct at 3:37 PM EST. You may notice things are somatizing or collecting in your body today. Make note of where things hurt, where you are feeling pain, and what’s “frozen” or not functioning properly–it’s a key (Chiron’s symbol) to healing. Chiron is not only the wounded healer (we heal ourselves and others through the profound experience of dealing with our own pain), but is also considered a bridge between the inner planets and the outer planets. Chiron is a centaur–half man, half horse, and was revered as a shaman, healer, and metaphysician. There’s power gathering force today; making it a fine time explore anything that’s “outside of society”, or in between worlds.  This is a maverick energy, so run with it. Investigate the world of dreams, trance, meditation and other “altered states”, practice holistic and long-distance or vibratory healing, look for symbolic messages in nature; employ tarot, astrology, runes or other divinatory arts to take a peek behind the veil.

Today’s Symbols both contain elements of the fanciful and highlight the Mercury/Neptune square and the influence of Chiron turning direct. They illustrate “in-between states”, with a focus on things that aren’t what they seem; metamorphosis rules here.

The Sabian Symbol is more directly Chironic with its emphasis on a shocking or surprising transformation. (The surprise element comes in today through the Moon/Uranus aspect–we may hear surprising or shocking news, especially related to a woman.) The image relates to the power of the imagination and enchantment on its highest levels, Key concepts are reaching for the stars and pushing beyond all barriers, or blossoming outward through exploring our own hidden or innate talents. On the down side, it can indicate dissociation or being disconnected from reality, living in a fairy tale or preferring to believe something fanciful rather than noticing the hard realities staring us in the face.

The Kozminsky Symbol features an odd juxtaposition of a man blowing bubbles in the air while ignoring a ledger at his feet. It reminds me of the old pre-Depression song, “I’m Forever Blowing Bubbles”, http://en.wikipedia.org/wiki/I’m_Forever_Blowing_Bubbles, which could be the theme song of a Mercury/Neptune stress aspect–just check out those lyrics!   The bubble-blower be trying to avoid dealing with the details or “dollars and cents (sense)” aspects of life, or it may indicate that he’s not interesting in “balancing the ledger” when it comes to his own karma. It’s a symbol of being misguided or led down an inappropriate path which will have negative ramifications later.  There’s a warning here against taking foolish risks and/or being seduced by the inappropriate. It’s not the time to be inattentive or to play around when work needs to be done.

The 8 of Wands LEAPED out of the deck today, so it definitely wants to be heard. This combination can indicate messages from afar. This is all very Sagittarian, and the Moon’s in Sagittarius today. As noted above, the element of shock or surprise may be a part of today’s news, and things seem to move with lightning speed as this is a very fast-paced combination. It also tells us to get out, take a look around, explore, and move beyond our usual limits. This is a guided journey, you’re protected–it’s all about transformation, our theme of the day.

There’s a visionary element here (Chiron is direct–it’s moving forward!) It can symbolize increased creativity, leaving the old behind, and travel of all kinds (inner and outer). If something’s been jammed up, here’s the cue to get moving again. Eliminate what’s stagnant (also a theme of yesterday’s eclipse) and feel secure in the knowledge that you’re on the right path. This combination can also literally indicate a change of residence or a move to a place that feels “free”, open, or gives you wider vistas. There’s a “can’t stay still” feel to this combination, a restlessness and need for adventure. It’s fast talk, fast walk, fast thoughts, perpetual motion, which can be very inspiring, but of course the other side is the “traveling salesman with a good line” aura, so don’t get too carried away by someone who shows up with a good line of patter and “happy feet”!