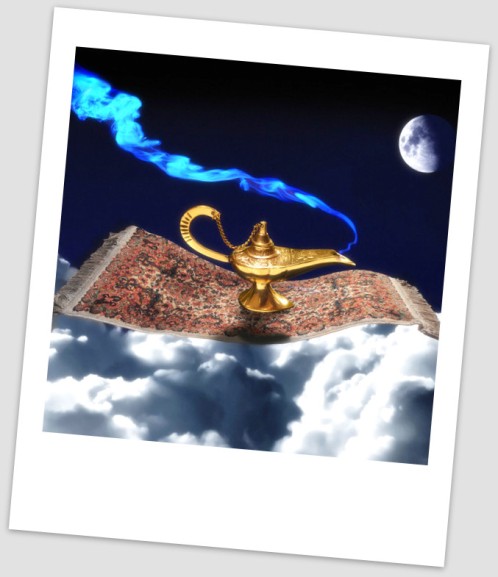 The Moon remains in Leo today. With the Moon sextile Venus and trine Uranus, it’s a good day to put yourself “out there” a little; attend social events or gatherings, talk to someone new or try something different. It’s also an excellent day to take some time off just to do things that you love! We’re feeling more confident and comfortable in our own skin today, so we might as well make good use of all this outgoing energy.  Just don’t overindulge (in anything). Later in the day the Moon aspects Pluto and Chiron and there’s a Mars/Chiron aspect to deal with, so people might turn touchy or just get too intense for the situation at hand. Inappropriate or displaced anger or taking offense where none is meant are two of the possibilities that could occur with these aspects.

Sabian Symbol for today’s Sun:  “A man on a magic carpet hovers over a large area of land. ”

Kozminsky Symbol for today’s Sun:   “A laborer leaning against a tree watching a number of others digging in a neighbouring field.”

The Sabian Symbol keyword is “Elevation”

The Kozminsky Symbol keyword is “Inertia”.

Both Symbols feature a man at a “still point”, but the connotations are very different. The man in the Sabian Symbol is focused and has reached the point in his search that allows him to take a detached and panoramic view, thus broadening and sharpening his insights.  By allowing ourselves to be still, we can process information and determine our next steps. Of course, the “magic carpet” brings in the theme of working magic and making things happen in our lives. (The Venus/Uranus aspect ties together beauty and uniqueness—there’s a gorgeous hand-made rug floating around up there in the sky!) In contrast, the man in the Kozminsky Symbol is letting other people do his work for him and allowing them to support him–they’re doing his share of the work as well. Since he isn’t their boss (Though with the Moon in Leo, he may feel like he is!) and he doesn’t seem to be supervising them, he’s not contributing to the task at hand and his stillness isn’t very productive.

Tarot Enhancer/Antidote:   The Magician/ 4 of Swords

“Magic Carpet Ride”.  Here’s our Magician, (we’ve got the carpet already), and here’s the “time out” (4 of Swords) that we need to take in order to go within. This is a good combination for meditation, taking time off for contemplation, or using our skills in order to do inner work and healing. We need to stop the chatter, the inner “rush hour” of the brain, and slow down the clatter and rush of our daily lives long enough to take the trip.

I can’t close without a quote from a Steppenwolf song:

“Well, you don’t know what we can find/Why don’t you come with me little girl

On a magic carpet ride.

Fantasy will set you free/Close your eyes girl

Look inside girl/Let the sound take you away.”